Come winter, most of the birds in Orkney show a bit of sense and migrate south to sunnier climates. Andy wasn't watching the skies this year.

Part and parcel of a skipper's job is the annual dry dock. Time to repaint the antifouling, scrape off all those criters that have made the hull their home and generally check that all is well below the waterline. Unfortunately there is no slip large enough to take the 80 or so ton Jean Elaine in Orkney so Scalloway was chosen. Those with an eye to history will know of this slips role in WW2 as the incoming port of the Shetland bus.

The trip north started in the Ferry Inn. A pint, a bar supper and the motley crew was ready to leave. On a calm night, with a reasonable forecast and the tides from behind the Jean Elaine made Stromness to Scalloway in 14 hours. Dolphins swam the bows for a while, doing what dolphins do, a quite spectacular sight. Not easy to capture on film though!

We checked the books and decided they were white beaked dolphins but if anyone knows better please feel free to correct us. 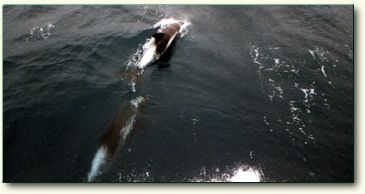 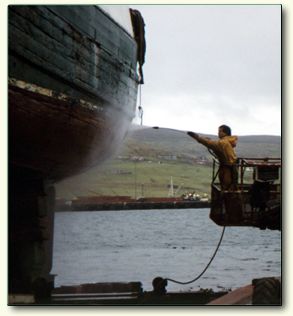 The boat was slipped and work began. First the hull was steam cleaned to remove the last year's marine growth and to prepare for a lick of paint. 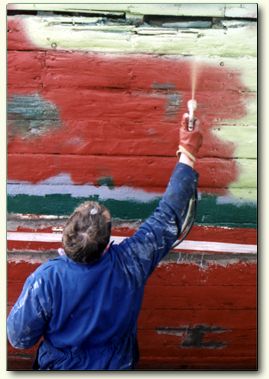 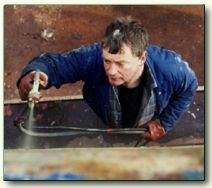 Paint.
Sounds a simple concept but it is not until you see the boat out of the water that you realise just how big she is, much like an iceberg. Surface area is the critical factor in this operation. That and dry weather. With a lot of the former and a lot less of the latter the logistics of the operation were starting to turn.

The weather turned bad. So bad that on some nights the boat rocked as if she were still afloat. Then the snow came, but worse still the snow melted. Painting was going to take a little longer than anticipated.

Still, the weather did not hinder work on the stern gear. The rudder was removed as part of the operation to upgrade to hydraulic steering and the prop taken off to allow work on the shaft.

Either that or the Shetlanders liked us so much they wanted us to stay.

As the pictures show the Jean Elaine looks quite eerie with the business bits absent.

Finally the boat returned home today. With all the work on her stern gear finally completed and a gap in the weather the Jean Elaine steamed south. She now smells of fresh paint, is smart and ship-shape and ready for another season of divers. 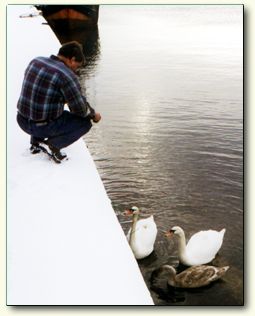