The Trip to Sule Stack 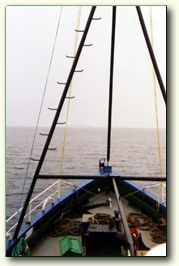 Sule Stack lies forty miles west of the Orkney mainland, an isolated rocky outcrop, home only to a colony of seabirds. The smell from years of accumulated guano is the first indication that the stack is near, especially as when we went, fog had reduced the visibility to less than a mile.

Conditions must be perfect to attempt this trip. The stack is a four hour steam out of Stromness, and even the slightest of swell can make diving tricky. Having had a clear spell for several days, we took the chance.

Diving Sule Stack was an awesome experience. Oceanic waters guarantee visibility of 20m+, while the steep walls of the stack are covered in an abundance of marine life.

Nestled at the foot of the stack lies the Manina, lost in 1968 (the Orcadian report is below). Her stern and prop lie in 44m, rising to the bows at 15m. Little dived, most of the shiney bits still remain!

On the way home an exhausted bird, lost in the fog, took a welcome break on the boat. 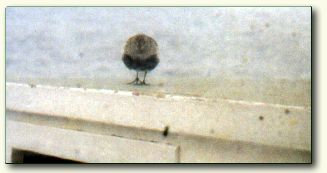 Nine men were lost, two of them are still missing, when the 1,333 ton Greek cargo ship Manina was wrecked on Stack Skerry 37 miles west of Orkney, early on Monday morning. Five survivors picked up by the Swedish tanker Vassijaure were taken to Stornoway.

It was just before five in the morning, when the Manina (formerly the Norwegian vessel Corvus), on passage from Bergen to Glasgow, radioed an SOS message saying she had grounded on the 120 ft Stack, which is five miles south-west of Sule Skerry Lighthouse. She said that one of the holds was full of water and that the crew, 14 strong, were abandoning ship.

The ship's red flares were seen by the Skerry lightkeepers. A combined sea and air rescue operation was immediately launched, with two Orkney lifeboats, various ships in the area and a Shackleton aircraft from RAF Kinloss all converging on the scene. A Force westerly wind was blowing and there was a short steep swell. The Manina, built in 1947, was taking a very heavy pounding and in fact by midday she had disappeared entirely, broken up and sunk.

The Shackleton had to return to her base when she developed engine trouble and she was replaced by another aircraft. Squadron-Leader D.C. Matheson, on his return to Kinloss reported:

"When we were flying at 500 feet we saw three of the survivors on a raft. They were near a Swedish vessel which had nets slung over the side to help to get the men on board. There were several empty life jackets in the water and a lot of wreckage".

He had seen a body about a quarter of a mile away from the rocks where the Manina had grounded. The Swedish vessel was the tanker Vassajaure which with a British cargo ship, the Afghanistan, had quickly arrived at the Stack.

On their way too was the Stromness lifeboat. Coxswain Alfred Sinclair and the R.N.L.I. 70ft long range Grace Paterson Ritchie, which has been based in Kirkwall while undergoing winter trials in northern waters. For the two lifeboats it meant a long haul of some 4 to 5 hours.

Another ship soon assisting in the search was the Kalgalos. She picked up a body 5 1/2 miles from the rock 'The Ross Kipling', which was 25 miles NNW from the Stack radioed that she was making for the skerry. The fishery cruiser Norna 55 miles distant was also making for the scene. The Vassiure radioed at 7.30am that she had picked up five survivors on rafts. 25 minutes later she reported that she had come upon five dead seamen hanging on to an upturned lifeboat and rafts. The Afghanistan at 8.10am located a raft and an empty upturned lifeboat with 12 life jackets, but with no survivors, either on or near it. She continued her search, up to 10 miles down wind from Stack Skerry. The drama continued all morning. By that time, the two lifeboats had also joined the ships. The Stromness lifeboat picked up two bodies about a quarter of a mile from the Stack. At 1l.45am the aircraft signalled that she considered the search area had been adequately covered. The surface ships were thanked for their help and they proceeded on their voyage, leaving behind the two lifeboats and the aircraft to continue the search.

The Grace Paterson Ritchie circled round the Stack and radioed that there was nobody on the rock, no sign of the Manina, which had by then completely broken up.

Only two large oilslicks, a mass of wreckage and an upturned lifeboat marked the spot where the ship had met her fate. On duty right from the start of the Kirkwall Coastguard Station and throughout these operations were District Officer Jack Cleghorn. Station Officer William Gardens and Coastguard Edward Warman.

It was midday when the Vassijnure left, making for Lewis with the five survivors, and the five dead men, who included the master, Captain Victor Kaprokefalos. The Stornoway lifeboat met the Swedish tanker 12 miles off the mainland of Lewis and took the survivors and bodies back to Stornoway. The survivors included Vassilias Kyriacou, the second mate, who as he was being taken to Stornoway said:

"Nearly everyone was asleep this morning when this happened. The ship struck a rock and the forward hold started to fill up. We abandoned ship and seconds later she keeled over and broke up. I was on a raft with some others. We could see some of the men in the water but we could do nothing because we had no ropes or lifebelts to throw them".

"It was really terrible. Within minutes all our clothes were wet and we had to keep rubbing ourselves and scratching ourselves to keep warm. Every time a wave came we thought we would capsize.
"Georgios Dumitriades, apprentice engineer, was in the sea for a long time. We found him hanging on to a lifeboat, which had overturned. We must have been adrift for about three hours before we were picked up. We were given tea and I don't remember much more. It was really terrible, so very cold."

The search by the aircraft and the 70ft lifeboat continued until late in the afternoon, the Stromness lifeboat leaving for home at 3pm with the two bodies she had picked up. She was unable to transfer these on to the Vassinure because of the heavy swell. With the bearings gone in one of her engines, she had to return at a reduced speed. She arrived back in Stromness at 8.45 p.m. while the Grace Paterson Ritchie was back in Kirkwall at 9.30pm. Stromness Lifeboat Coxswain Alfred Sinclair told the Orcadian.

"There was absolutely no sign of the Manina, only lots of wreckage of lifeboats, doors and tables. The seas were heavy and the spray breaking almost up to the top of the rock. We picked up the two bodies floating in the water with lifejackets a quarter of mile off the Stack. They were about 100 yards apart"

Two of the survivors flew to Kirkwall from Stornoway yesterday to identify the two bodies brought to Orkney by the Stromness lifeboat.

Formal identification took place in the mortuary of the Balfour Hospital.